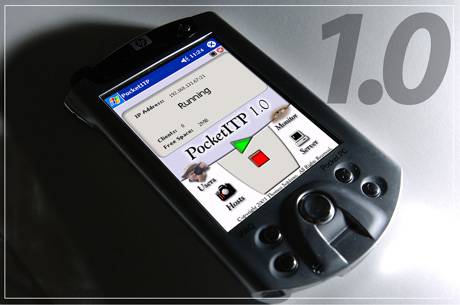 PocketITP 1.0 - The Workflow-Oriented FTP Server that Fits in your Pocket!

Toronto, ON - October 22nd, 2003 - We are proud to announce the release of PocketITP to the general public. PocketITP brings all of the powerful features of the desktop version of ITP to PocketPC PDAs. Like it's bigger brother, PocketITP is a FTP server that is specifically designed to optimize photographic workflow, with features such as batch renaming, automatic directory generation and more. This package is especially targeted at users of Nikon's WT-1 wireless transmission device, allowing images to be organized the moment they are received by the PDA.

Additionally, PocketITP brings a number of new features that are suited to the smaller platform. An all new user-interface design provides simple access designed for these compact devices - allowing you to access many features with a single hand! It also offers special power management features and the ability to switch storage media on the fly if space runs out. These features help to combat the limited resources available, allowing you to work effectively regardless of which type of machine you are using.

In addition to the long list of advanced features, PocketITP also has the advantage of being tested against the WT-1 wireless transmitter by Nikon staff. This ensures you that our product will not have any hidden incompatibility and allows you to get to work as soon as possible. The Nikon WT-1 is a potentially powerful device and we are committed to unlocking that potential as much as possible by designing our server to work with it!


Pricing and Availability:
Best of all, ITP 1.0 is being offered as freeware to the public. Commercial versions with additional automation features will follow shortly if there is sufficient interest. Feel free to download and try ITP for yourself and see how it works in your workflow!