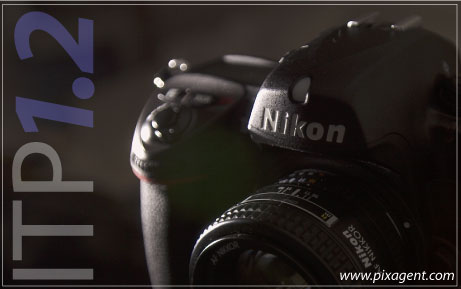 Toronto, ON - February 20th, 2005 - We are happy to announce the release of a public beta for version 1.2 of ITP! This new version brings the same powerful features that Nikon users have been enjoying for the last year to photographers using the new Canon WFT-E1 wireless transmitter. The assisted configurator system now produces configuration files for both the Canon WFT-E1 and Nikon WT-1 - simplifying the process of getting these complex devices to work on your system.

Like it's predecessor, ITP 1.2 assists users in the creation of configuration files for their wireless transmitter. ITP will fill in many of the details automatically, reducing the number of variables that photographers need to worry about when setting up the camera. Due to the complexity of IP networking, many users struggle to set up their wireless transmission equipment for the first time. Since ITP has access to most of the critical data that is necessary, photographers can have their WFT-E1 and WT-1 transmitters up and running in much less time than manually entering the values.

In addition, ITP will also manage your library of wireless profiles and allow you to rapidly switch between different networks with only a few clicks. In addition to keeping all of your profiles in a centralized location, this system also handles loading the files onto memory cards to reduce the need to shuffle files back and forth. This allows you to quickly and efficiently work in a variety of environments without having to figure out new settings every time you switch. Additionally, since ITP places both WT-1 and WFT-E1 configuration files on your cards, you can also seamlessly work in mixed environments with a single user interface.

This version is being released in a beta form to get it out to Canon users as soon as possible. Please note that the core functionality has not changed, so the beta status will not affect the stability of the server itself. The configurator UI and profile generator may not have the fit and finish of a final version, however they will allow the many photographers who are picking up their WFT-E1s to quickly get going. We hope to get to a release status within the week, and if you register with us you will be informed of its availability.


Pricing and Availability:
As before, ITP 1.2 is being offered as freeware to the public. Commercial versions with additional automation features will follow shortly, however all current versions of ITP and PocketITP are free for anyone who is interested. For more information and to download ITP 1.2 please visit the following website:

ITP is currently only available for Windows (98, ME, NT, 2000, XP and 2003) and PocketPC* (PocketPC 2002, WM2003) platforms. A Mac version is planned, however it will be produced after the commercial version is released in order to make enough money to purchase an Apple machine to do the development on.

Over the last year, we have assisted many people in setting up their WT-1s and as such have seen many issues that people have had problems with. We released ITP 1.1 in an effort to help remove many of the stumbling blocks that caused people problems - making their experience with setting up the WT-1 much easier. Our system is so effective that it has been recommended by Nikon's support divisions since it was available.

With the release of the Canon WFT-E1 we aim to bring these same advantages that we have provided to Nikon users to those using Canon equipment. Our goal is to make the setup and use of wireless transmitters as simple and intuitive as traditional photographic equipment. We continue to strive to improve our products and will be releasing major revisions within the next month.